I was recently presenting a workshop and during a break one of the participants said to me “You must spend a lot of time learning important things every day.” I smiled. He asked what did I learn the evening before the workshop.

Here’s the story. I was washing the soap off my hands and the water was cold. The soap left a soapy residue. So I turned on the hot and Presto it was nice and clean. My quest for knowledge as always started with a “Why? … why does hot water remove the soap better than cold?”

The answer is complex and wonderful thanks to @chris at StackExchange on physics:

“The other answers are correct, but I think that you might benefit from a more “microscopic” view of what is happening here.

Whenever one substance (a solute) dissolves in another (a solvent), what happens on the molecular scale is that the solute molecules are surrounded by the solvent molecules.

What causes that to happen? As @Chris described, there are two principles at work – thermodynamics, and kinetics.

In plain terms, you could think of thermodynamics as an answer to the question “how much will dissolve if I wait for an infinite amount of time,” whereas kinetics answers the question “how long do I have to wait before X amount dissolves.” Both questions are not usually easy to answer on the macroscopic scale (our world), but they are both governed by two very easy to understand principles on the microscopic scale (the world of molecules): potential and kinetic energy.

On the macroscopic scale, we typically only think about gravitational potential energy – the field responsible for the force of gravity. We are used to thinking about objects that are high above the earth’s surface falling towards the earth when given the opportunity. If I show you a picture of a rock sitting on the surface of the earth:

And then ask “Where is the rock going to go?” you have a pretty good idea: it’s going to go to the lowest point (we are including friction here).

On the microscopic scale, gravitational fields are extremely weak, but in their place, we have electrostatic potential energy fields. These are similar in the sense that things try to move to get from high potential energy to lower potential energies, but with one key difference: you can have negative and positive charges, and when charges have the opposite sign they attract each other, and when they have the same sign, they repel each other.

Now, the details of how each individual molecule gets to have a particular charge are fairly complicated, but we can get away with understanding just one thing:

What this means is we can always think of the potential energy between two atoms as looking something like this: 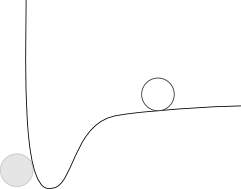 The “ghost” particle represents a stationary atom, and the line represents the potential energy “surface” that another atom would see. From this graph, hopefully, you can see that the moving atom would tend to fall towards the stationary atom until it just touches it, at which point it would stop. Since all atoms have some attractive force between them, and only the magnitude varies, we can keep this picture in our minds and just change the depth of the potential energy “well” to make the forces stronger or weaker.

Now if I ask “where is the rock going to go?,” It’s a little bit tougher to answer. The reason is that you can tell the rock is “trapped” in the first little valley. Intuitively, you probably can see that if it had some velocity or some kinetic energy, it could escape the first valley and would wind up in the second. Thinking about it this way, you can also see that even in the first picture, it would need a little bit of kinetic energy to get moving. You can also see that if either rock has a lot of kinetic energy, it will actually go past the deeper valley and wind up somewhere past the right side of the image.

What we can take away from this is that potential energy surfaces tell use where things want (I use the term very loosely) to go, while kinetic energy tells us whether they are able to get there.

Let’s look at another microscopic picture: 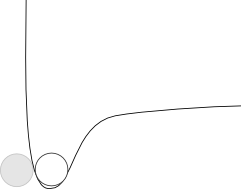 Now the atoms from before are at their lowest potential energy. In order for them to come apart, you will need to give them some kinetic energy.

By now you might be able to guess how increasing the temperature of water helps it to clean more effectively, but let’s look at some details to be sure.

We can take the microscopic picture of potential and kinetic energies and extract two important guidelines from it:

Going back to the coffee cup question, all we need to do now is think about how these will play out with the particular molecules you are looking at.

Since molecules with large charges tend to stick to water molecules, we call them hydrophilic – meaning that they “love” water. Molecules that don’t have large charges are called hydrophobic – they “fear” water. Although the name suggests they are repelled by water, it’s important to know that there aren’t actually any repelling forces between water and hydrophobic compounds – it’s just that water likes itself so much, the hydrophobic compounds are excluded and wind up sticking to each other.

Going back to the dirty coffee cup, when we add water and start scrubbing, a bunch of stuff happens:

We can tie this back to the original thermodynamics vs. kinetics discussion. If you increase the temperature of the water, the answer to the question “How much will dissolve” is “more.” (That was the thermodynamics part). The answer to “How long will it take” is “not as long” (kinetics).

And as @anna said, there are other things you can do to make it even easier. Soap, for example, is made of long-chain molecules with one charged end and one uncharged end. This means one end is hydrophilic, while the other end is hydrophobic. When you add soap to the picture, the hydrophilic end goes into the water while the hydrophobic end tries to surround the oils and burnt stuff. The net result is little “bubbles” (called micelles) made up of soap molecules surrounding hydrophobic molecules that are in turn surrounded by water.”

…and that’s what I learned by asking about hot water.

So there’s a point here about learning. Learning is curiosity fueled by a solid dose of “whyness” supported by an open mind. Learning is always on if you are endlessly curious and it has nothing to do with what you are told to learn, supposed to learn, need to learn, or are forced to learn. It’s the innate response to the curiosity that has driven knowledge and know-how for 100,000 years of human thinking. It is I believe the thing that separates us from all other creatures and the major reason our brains grew to where we are today. Why and how we learn has been the focus of years of my study and conversations, writing and research.

View all posts by dgrebow1313